As we edge towards the second round of voting, markets have become increasingly jittery about a potential Le Pen victory. However, the latest polling data suggests that Macron will just about hold on to the presidency. In this event, markets will breathe a sigh of relief.

When Russian tanks rolled into Ukraine and the horrors of war returned to European soil, the imminent French election unsurprisingly took a back seat. At that moment, Emmanuel Macron’s route to a second term seemed more certain than ever; the French president was central to the West’s response while his biggest rivals from both sides of the political spectrum scrambled to justify their historically friendly stances towards Putin. Regardless, voters don’t tend to get rid of wartime leaders during a conflict, and that’s just what Macron had become. This election was meant to be a foregone conclusion, a non-event.

After an initial surge in the polls following his prominent role in the international response to the Russia-Ukraine crisis, Macron’s decision to focus on the war has started to hurt his campaign. It has made it easier for rivals to label him as distant, haughty, and out of touch. The recent scandal involving exorbitant government contracts with the consultancy firm McKinsey & Company, who are accused of tax fraud in France, has not helped. As a result, claims that Macron is elitist have gained traction with many voters on the fringes.

Meanwhile, Marine Le Pen, his main rival throughout the campaign has focussed on the rising cost of living and positioned herself as a champion of the ordinary citizen. This has worked well in rural regions where Macron’s elitist image resonates strongly. The far-right candidate no longer advocates for ‘Frexit’ and places greater focus on economic and social reform rather than immigration. She has also detoxified the image of her party by rebranding it as the Rassemblement National (National Rally) and expelling her father, Jean-Marie Le Pen, the controversial founder of the Front National. Nonetheless, her manifesto remains controversial, with policies such as a ‘national preference’ law for employing French workers over foreigners, a ban on Muslim headscarves in all public places, and leaving the NATO command structure.

No shocks in round one

On Sunday we had the first round of voting and as expected, Macron will face Le Pen in the second (and final) round, marking a repeat of the 2017 election. Remarkably, Sunday also marked the nail in the coffin for the two traditional moderate parties that have dominated French politics for decades. Les Republicains and Le Parti Socialiste, comparable to the UK’s Conservatives and Labour, received a combined 6.5%[1] of the vote. This suggests that the French electorate has shifted towards the extremes, with the far right (combined between Le Pen and Eric Zemmour of the Reconquête party) receiving over 30% [2] of votes and the far-left candidate, Jean-Luc Mélenchon, narrowly missing out on the second round.

Despite the narrowing gap between the two candidates (see figure below), the base case remains a Macron victory. Crucially, the outcome is likely to hinge on how much momentum Macron can get behind a ‘republican front’ of moderate voters who will back him to block the far right. Much of this will depend on how Mélenchon voters react. The far-left candidate explicitly told his supporters to “not give a single vote to Le Pen” but stopped short of recommending they vote for Macron. However, Macron’s unpopularity with the far left, and Le Pen’s suggestion that she would be willing to include left-wing politicians in her government, could prompt Mélenchon voters to either abstain or switch to the far right. 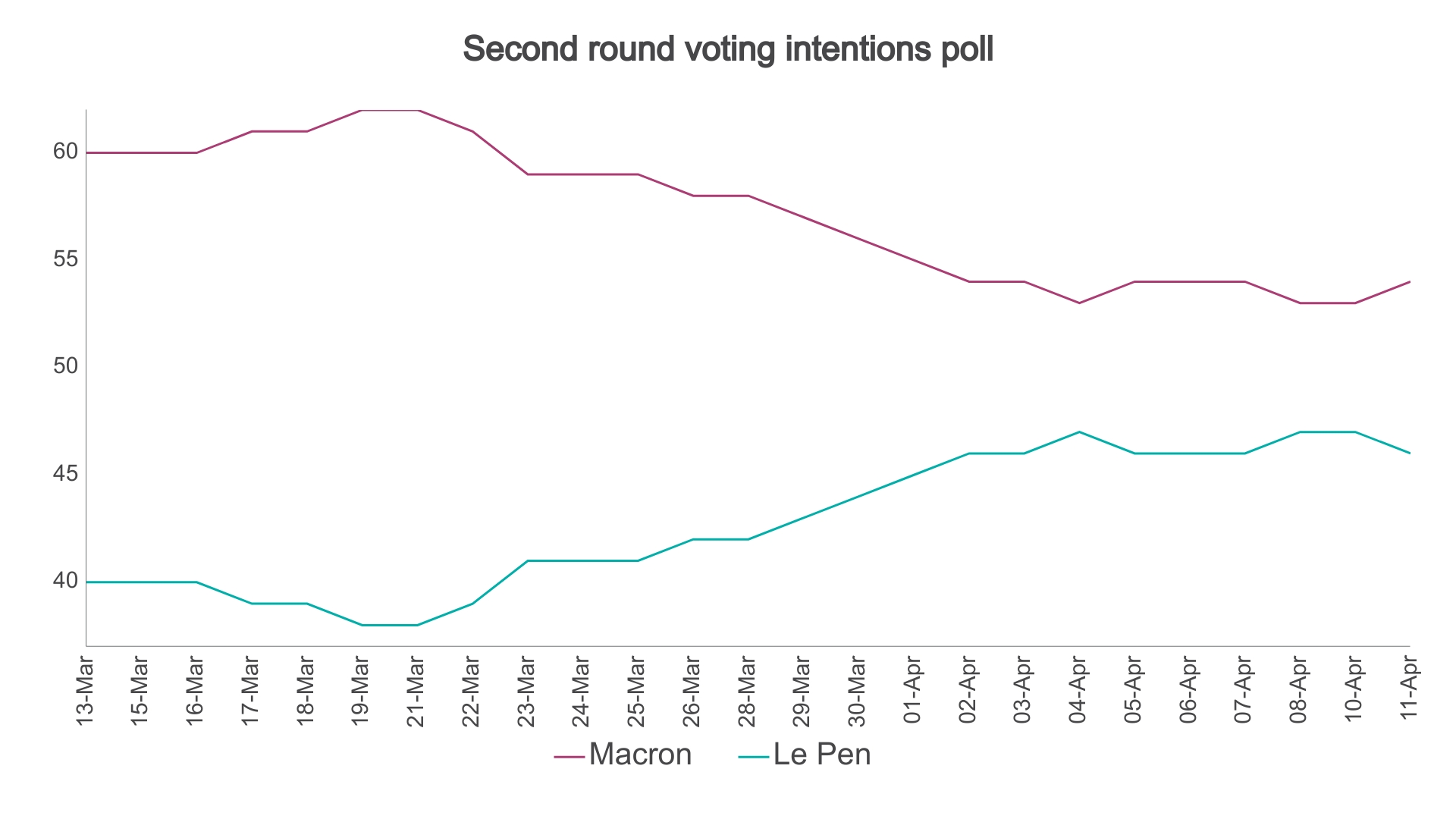 As we inch towards the second-round vote, a Le Pen victory cannot be ruled out. In fact, she is currently polling similar numbers to the Vote Leave campaign in the days before the Brexit referendum. The much-awaited head-to-head debate takes place on Wednesday 20 April, four days before voters return to the polling booths on Sunday 24 April. This will undoubtedly be a decisive moment in an election where many voters are still undecided.

In the short term, a Le Pen victory could provide consumers with a welcome boost in purchasing power, which has been the hallmark of her campaign. She is proposing to scrap income tax for workers under the age of 30 and reduce VAT on energy. Over the long term, however, Le Pen’s policies could prove expensive and see a surge in public debt levels, which could potentially weaken the French economy.

Moreover, while Le Pen is no longer advocating Frexit, she remains openly Eurosceptic and wants to significantly reduce the influence of the EU on France, and vice versa. At a time when it looked like the war in Ukraine would pave the way for greater EU fiscal coordination and investment on energy and defence, a Eurosceptic French President would clearly undermine these efforts.

Macron’s fiscal policy is expected to be more moderate. He hopes to help voters combat the cost-of-living problems by tripling the ‘Prime Macron’, a tax-free bonus payable by employers to workers on lower earnings. Over the medium term, the continuation of his economic reforms, such as relaxing labour market rules, should continue to aid economic growth. However, even if he is elected and backed up by a parliamentary majority, Macron may struggle to fully implement his agenda. He plans on delaying the retirement age to 65 to free up money to invest in digitalisation, green transition, and defence. But pensions are a sensitive subject in France, and reform could well be met with social unrest. Tellingly, within a day of the first round, Macron began paving the way for concessions. He stated he was open to debate his proposed pension reforms and suggested he would be willing to consider a referendum on the matter.

Table 1: Comparison of the main policies 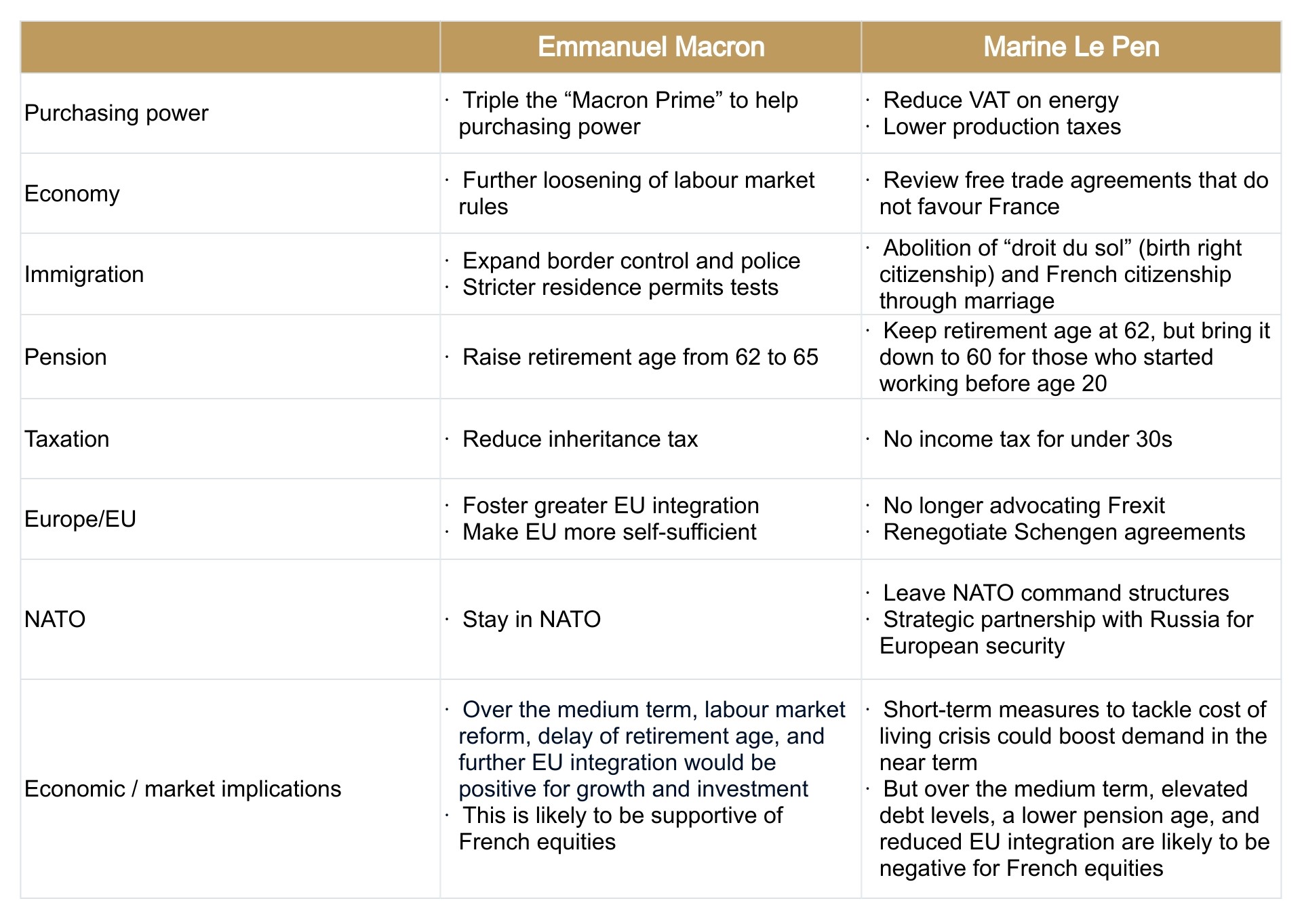 As the polling gap closed in recent weeks, markets have become increasingly jittery about a potential Le Pen victory. While volatility in European markets due to the war makes it hard to disentangle the exact impact of the ‘Le Pen risk’, French banks and infrastructure stocks have sold off. For banks, the fear is that Le Pen would drive a rift in the EU and weaken the French economy, which would hurt profitability. For infrastructure stocks such as Vinci, who own large parts of the French private motorway network, Le Pen’s pledge to nationalise motorways saw the stock plunge around 7%[3].

Similarly, the spread between the yields on French and German government debt increased by 10 basis points over the last week as investors sold French debt[4]. Some of these moves were partially reversed on Monday after Macron convincingly won the first-round vote. But the French-German spread remains 50% above its average over the last two years[5], highlighting the ongoing risk of a Le Pen Presidency.

However, if Le Pen triumphs, we expect the euro to trade a couple of percentage points lower against the dollar. Sectors affected by Le Pen’s plans would also sell-off further.

It is important to remember that this election is to pick the head of state. The subsequent parliamentary elections in June will also be crucial. The National Rally, Le Pen’s party, has tended to struggle in these elections, as shown by the fact it currently holds only six of 577 available seats. If she becomes president, weeks of complex coalition negotiations would ensue, further fuelling uncertainty. This could also result in her policy agenda being watered down. In contrast, Macron is more likely to win a majority given that his party and its allies currently hold around 60% of the seats.

As it stands, the latest polling data suggests that Macron will just about hold onto the presidency. In this event, markets will breathe a sigh of relief. Over the medium term, we expect Macron to pursue economic reforms that will continue to boost the productive capacity of the economy, to the benefit of French equities. European integration will continue to gather pace, which should also pave the way for sizeable fiscal expansion.

But a Macron victory would only be a short-term reprieve. The historic retreat of the moderate parties and growth in the far-right vote, combined with the fact Macron would not be allowed to sit for a third term, means that the future of French politics has never looked so uncertain.

Whilst considerable care has been taken to ensure the information contained within this article is accurate and up to date, no warranty is given as to the accuracy or completeness of any information and no liability is accepted for any errors or omissions in such information or any action taken on the basis of this information. It is based on our opinions which may change.